Our botanical and geological survey of the North Face of Ben Nevis started properly this week. It's been a truly inspiring and exciting five days!

The North Face Survey is a three year project led by the Nevis Landscape
Partnership, sponsored by Mammut, in collaboration with Midland Valley
Exploration and funded by the National Lottery Heritage, Scottish Natural Heritage
and The Highland Council.

The aims and objectives of the project are as follows:
 Access and survey unrecorded and unexplored areas
 Increase data and knowledge of rare arctic-alpine species
 Increase geological data and knowledge
 Strengthen relations and knowledge transfer between geologists, ecologists
and mountaineering communities.
 Inspire the public and increase awareness and appreciation of mountain
environments and some of the issues they face such as climate change


On Monday, Donald, Andy and myself headed up to the Castle area to have a look at South Castle Gully. We traversed into the gully from higher up to avoid the chockstone and proceeded to ascend the gully. In summer conditions, this really isn't to be recommended with large perched blocks balancing on scree and a fairly steep bit of climbing with rock akin to climbing on soggy Weetabix! Still, it was a really useful day and we did come across some of our target species of plants. Finding out parts of the mountain where we could take our botany and geology experts to have a closer was part of our aim but it was also important for us to rule out places that were just too difficult or dangerous to get to.

On Tuesday, Scott and I were out with geology expert Roddy to explore part of the Coire Leis area. We headed up towards the traverse into North East Buttress and Roddy took some measurements of faults and contacts between the volcanic Breccia, the Inner Granite and the Andesitic lavas. Part of the aims of the geological aspect of the survey was to look at the current theory of how Ben Nevis was formed. According to Roddy there are quite a lot of discrepancies about Ben Nevis being a Caldera subsidence (or a collapsed volcanic plug) and some of this weeks findings may well result in a new geological model as to how the Ben was formed! There was a fault line running along the Little Brenva face that Roddy was keen to locate but in thick mist and rain, we really couldn't see much. We headed up by the old abseil posts onto the end of the CMD arete but had to call it a day when visibility reduced further. We made a note of this location and it was put down as  a place to visit on a day of better weather.
The BBC team from Landward were up filming on Wednesday so we started the day taking them up Ledge Route before heading along to the Comb.
The other teams had been busy on Tuesday rigging two long abseils down the Tower Face of the Comb and along the Don't Die of Ignorance line and we now had a chance to take our experts down the 200m abseil to explore! After an exposed little traverse along the narrow ridge, Mike and I took our Botany expert Ian down the line which eventually finished in Comb Gully. As we approached the vegetated patch on Hesperides Ledge, we spotted some promising indicator species of plants. Seeing Ian's enthusiasm as we arrived on this botanical treasure trove was really inspiring and we found previously unrecorded populations of Tufted, Highland and Alpine Saxifrage. Meanwhile, Al's team had also found some large populations of Highland and Tufted Saxifrage in the No. 5 gully area! After all the great finds we think calling the day 'Big Wednesday' was justified! 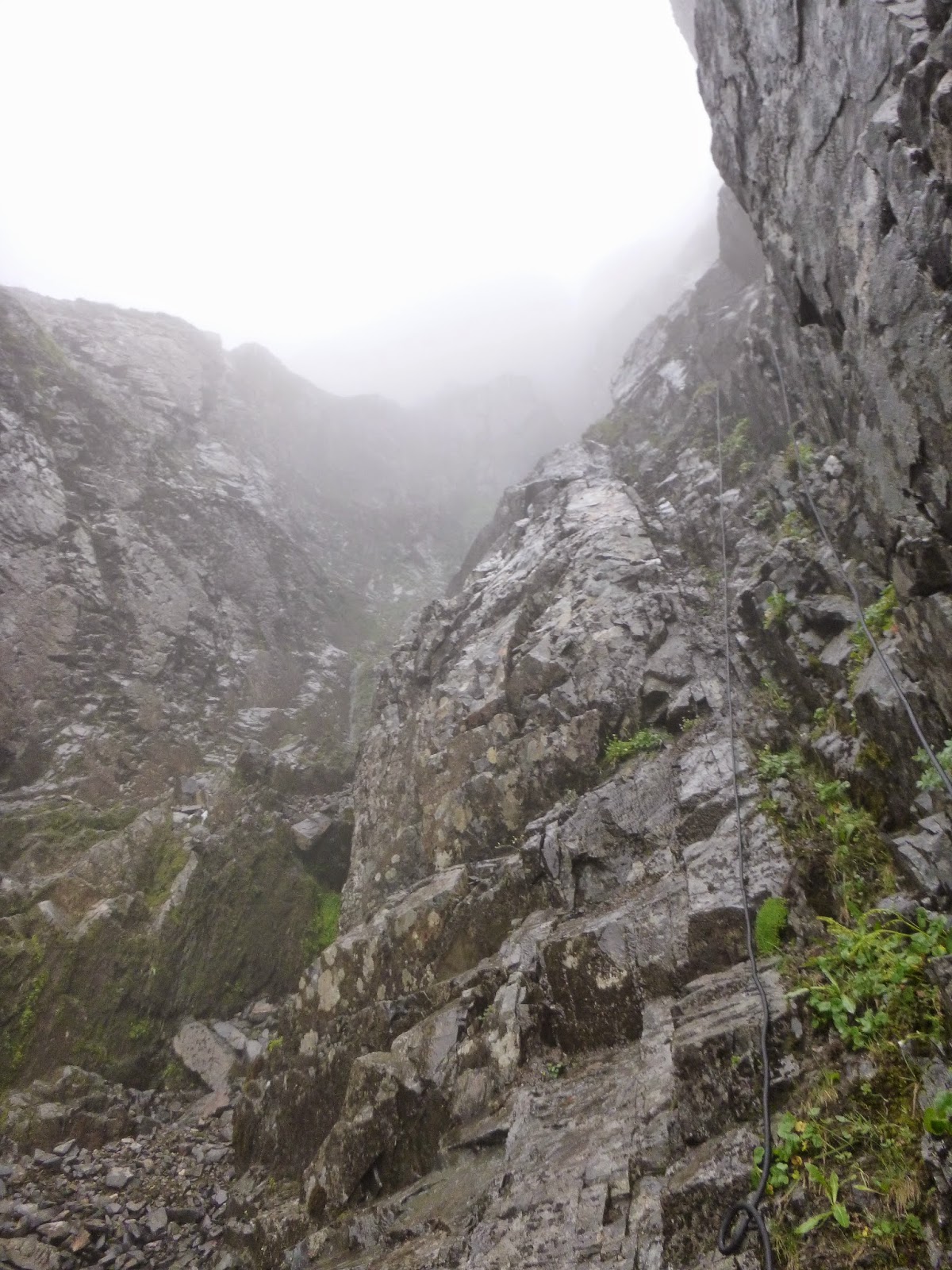 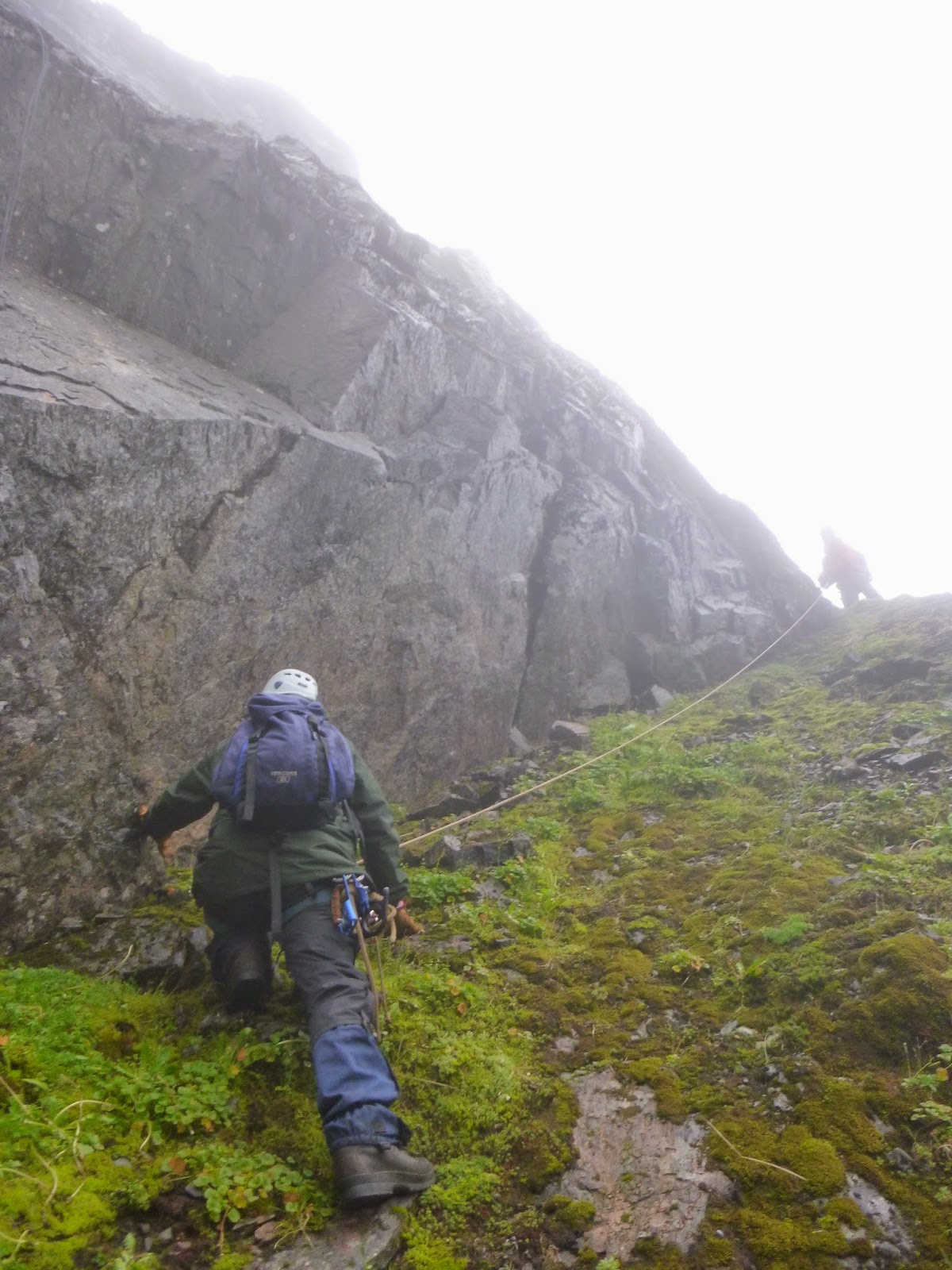 On Thursday, I was out with Mike and Roddy, our Geology expert. One of the team had spotted an interesting looking wall on the right side of Ledge Route and our aim was to get Roddy to it to have a closer look. Roddy's knowledge of the geology of the Ben was outstanding. On our way up Ledge Route, he pointed out a large part of the route that he reckoned was so geologically unstable, that it could fall down at any time! Eeek! Upon arriving at the small wall of rock, Mike lowered Roddy down to take some readings and we then roped up to explore some of the smaller areas of rock below. Roddy was even able to show me some crystals in the Andesite which could show which way the lavas were flowing- amazing!


In the afternoon, I was lowered into No.3 gully with Ian and again, we spotted some more Highland Saxifrage. This was another damp and loose part of the Ben to explore, which was in keeping with the rest of the locations we've visited this week! We ended the day getting to see some of the team make the spectacular abseil down the No.3 Gully Buttress area. 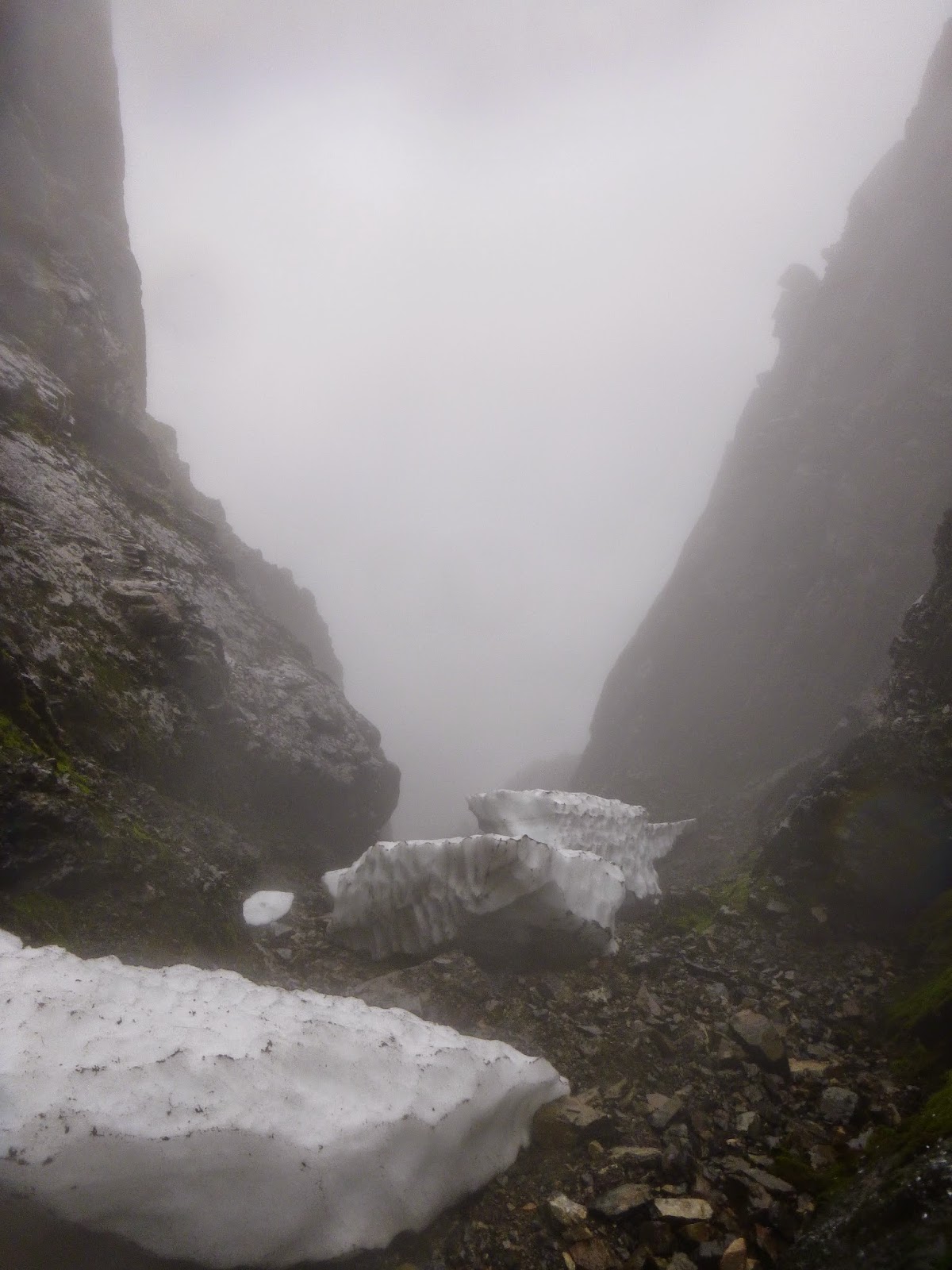 With bodies feeling a bit tired, and a LOT of kit to take back down from the hut, Friday was a slightly shorter day.Al, Andy and myself headed up the Ledge Route commute to strip the 200m of ropes from No.3 Gully buttress. Al abseiled down first to locate the stuck ropes and found them after abseiling 98m of his 100m rope! I then hauled up 200m of rope before we carried it back down Ledge route. A cup of tea in the CIC hut, some packing and a team picture, and it was time to head down.


A massive thank you to all the funders and sponsors for allowing this project to happen-Mammut, Midland Valley Exploration,the National Lottery Heritage, Scottish Natural Heritage
and The Highland Council.
Also, a huge thank you to the other Mountaineering Instructors I was working with this week for all the tips, knowledge and good humour that made even the wettest and most loose parts of the Ben fun to be on!
Finally thanks to our experts who taught us all so much and who took being dangled down some pretty wet and loose places, all in their stride.
I'm looking forward to next year already.
Posted by Unknown at 06:23